In 2006 Lin and I started camping in a field in Iowa.  When our tent was flattened by a thunderstorm, we bought a 1964 Manorette on ebay for $700 and towed it from Wisconsin. This was our home in the summer of 2007 while we built our 14×18′ cob house.  You can see the RV in the distance behind our son Mani who flew back from college to help us get started.  That’s my mom and her dancing partner Bill mixing the cob with their feet.  Cob is the way peasants in southern England used to build their little thatched roof cottages.  All it takes is clay soil, sand or other aggregate and some straw to make a structural and sculptural material. 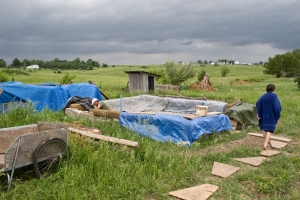 You will note the dark clouds which were very common that summer. Keeping the rain from eroding our cob walls was our greatest stress.  It took ten weeks and 500 batches of cob to create walls that were a foot and a half thick.  More than 60 people helped out, giving many work days to the project and making it a community building as well as a house building experience.

The picture below shows the always popular cob toss. Cob gets its name from the shape of the balls that the material is formed into so that it can be passed from the mixers to the wall builders. Cob is an old English word for something roundish. Round bread could be called cob as were goblins if they appeared as a dark lump in the road at night. 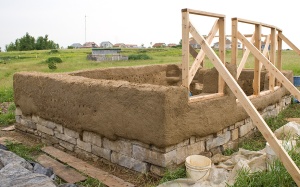 There is no frame in a traditional cob structure nor are any forms used. Wood bucks are built into the walls to receive doors and windows.  Lin and I learned cob from Ianto Evans and his wife Linda Smiley at their homestead in southern Oregon. There it was common to put an old piece of glass directly into a cob wall.  When we tried this in Iowa we had condensation running down the glass into the cob.  Cold climates require good windows! 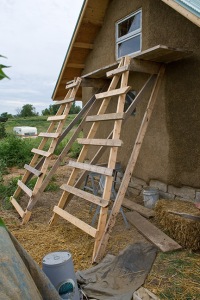 Ianto’s cool scaffold design is featured in his book, The Hand Sculpted House, which is the best book on designing and building small homes that we have found. 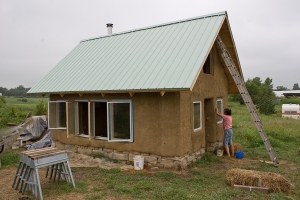 We went with a metal roof after considering many more natural options. The metal is best for capturing rain water.

You would never know Lin was mixing fresh cow dung. In the years since this picture was taken this has become an increasingly important component in our exterior plasters.

Friends gave us a retired Taiwan “Jotul” woodstove which is our version of central heating. In a cob house it is important put the stove away from the exterior walls if the outside temps stay below freezing. Otherwise heat from the stove can easily go out of the house thru the wall.

The cozy kitchen is a little too cozy. Lin will use the summer kitchen as long as she can and is currently using the gypsy camper as her winter kitchen.

The Loft on the other hand has worked for us. There is good cross ventilation with awning windows at each end to keep it cool in the summer and heat naturally rises in the winter. The queen size bed tucks into the eave very efficiently.

Six years have passed sin!ce the summer that produced this house. How many friendships were made mixing cob and making plaster Unfortunately, our cob house is not always as warm as those friendships. In a climate like Iowa, cob is best kept indoors in floors, inside walls and rocket stoves where it can provide positive thermal mass without losing its heat to the frigid winter. But don’t think I am second guessing our decision to build with cob. Cob bonded us to the land and to our new tribe.